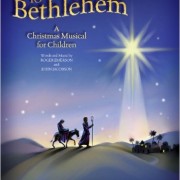 The children and youth will present a Christmas Musical — On Our Way to Bethlehem — on Sunday December 13, 2015 at 4:00 pm. The musical will take us on the journey to Bethlehem with the younger children portraying the Biblical characters and the older youth sharing the significance of the journey for our lives today. Join us on the journey! A time of fellowship and serving of Christmas cookies will follow the performance. The musical was created by Roger Emerson and John Jacobson, and distributed by Daybreak Music. 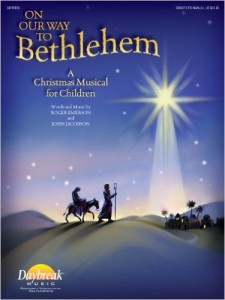 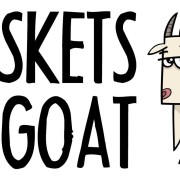 On November 14, 2015, the old Sale Barn on Sunny Slope Farm was the site of the first pilot show of 12 Baskets and a Goal, a project of Ted & Co, Heifer International, and the Church of the Brethren in support of Heifer’s work around the world. The event featured the play, The Jesus Stories: Faith, Forks, and Fettuccine, written and performed by Ted Swartz and Jeff Raught, interrupted at two intervals to auction off home-made breads and cakes. It was an evening filled with humor, laughter, and generous support of Heifer International. Over $5,000 was raised during the evening with all proceeds going to Heifer International.

The 12 Baskets and a Goal project (http://www.tedandcompany.com/shows/12-baskets-and-a-goat/) “seeks to raise awareness of poverty and empower communities to restore dignity to those in need.” The Jesus Stories “asks two questions….what are we having to eat and who are we eating it with? It’s a play about Jesus and food; about what we need every day to sustain us, nourish us, and connect us with God and with others.” The play, which features original songs and music by Jeff, blends humor and theological reflection. Over the next three years, Ted and Co hope to perform their play and auctions all over the country for the benefit of Heifer International. 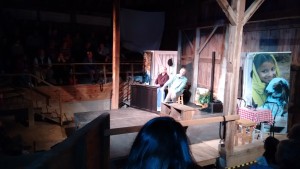 First Church of the Brethren’s Friendship Class gave money to help cover startup costs for the event at Sunny Slope Farm. Members of the class also donated $1,000 in support of Heifer International. The youth donated jars of their recently made apple butter. Other members of the church donated cakes and breads. Many of the breads were auctioned off in baskets donated by Cathy Cupp, Linda Logan’s sister.

Beth and Harry Jarrett’s farm, Sunny Slope Farm, is a certified Virginia Century Farm, owned and operated by the family for 186 years. 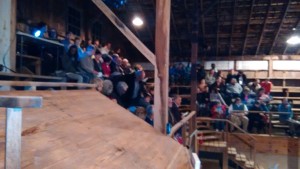 Pastor Beth among the gathering crowd