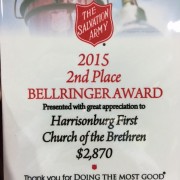 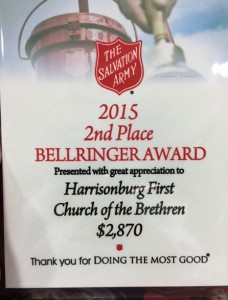 First Church of the Brethren was awarded 2nd Place for the 2015 Salvation Army Bellringer Award among local churches.  The award was presented to FCOB at the annual Salvation Army Volunteer Appreciation Dinner that was held at Eastern Mennonite University on Monday, May 2.

First Church has been active in the Red Kettle Campaign for years, but since 1998, the FCOB Youth Program has spearheaded the church’s volunteer efforts.  During the six days of ringing, which included over 50 hours and dozens of volunteers, outside of Wal-Mart on Route 42 South of Harrisonburg, $2,870 was raised for The Salvation Army.

In addition to the Bell Ringing, FCOB also prepares and serves weekly meals at The Salvation Army Shelter in Harrisonburg, a program that was started eight years ago.