There are moments in our lives when God uses people to inspire us and till up some of the hard soil in order to prepare us for the new growth that he is bringing about. I will never forget attending a recent homecoming event at Eastern Mennonite University and hearing the recipient of the Distinguished Service Award tell her story.

Nadine Brunk, after the prodding of doctors and friends, took an unexpected medical mission trip to Haiti. While there, the suffering of Haitian women during childbirth moved her deeply. Nadine shared a pretty staggering description of truck loads of newborns and mothers that die each week due lack of resources such as prenatal vitamins, medication for worms, antibiotics and training; specifically the training that she had. She was deeply moved with compassion for her Haitian sisters and instead of returning back to the states and settling back into her routine, she dared to ask God the question, what is you invitation to me  with the unique gifts that you have given me in this oppressive situation?

She continued to sit with the enormity of the problem, the intense pain and suffering of the women and their unborn babies. She allowed the unsettledness she experienced to open her more deeply to what God might be calling her to.

Some years later she began an organization called “Midwives for Haiti”. She took the skills God had given her and shared them with other women in Haiti… empowering women of Haiti to help other women. Her attentiveness of the movement of God in her through inspired by the women of Haiti began something far greater than she could ever imagine… sometimes, God uses others to inspire us to move beyond the comfort of our current situation into something far greater and fulfilling than we could ever imagine or dream of.

Here is an excerpt from their website about the enormity of the problem they are seeking to address:

“In Haiti, 76% of all deliveries are done by non-qualified persons, contributing to the highest infant and maternal mortality in the western hemisphere. 15% of newborns have low birth weight and 25% of the children suffer from chronic malnutrition. The World Health Organization has estimated that the things professional midwives know how to do – preventative prenatal care, handling complications of pregnancy and birth, and teaching nutrition –could totally change these statistics.”

She has now taught and graduated three classes of Haitian women who have been trained professionally to be midwives to the women in their villages. They wear pink scrubs when they make their visit in pink jeeps to some of the remotest places in Haiti bringing health and hope. They provide prenatal care and skilled nursing assistance to their Haitian sisters; women who were once hungry are now being satisfied because one every day woman dared to ask the question, listen for the answer and give it a try.

As I listened to her story, I was also deeply moved. I too, long for to be a part of a story greater than myself… I long to be a part of this great God story that is unfolding all around us. I pray that I will not settle for less than that.

dignity
instead of
tears

pioneering
instead of
burying

One woman’s dream
realized
instead of
settling 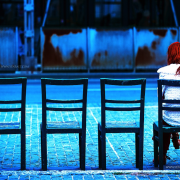 Help my eyes to see

sync your heart with God's heart

What does it mean to be playful?

So you want to be missional?

It takes some effort to frame our days...